This was a really fun mural painting art lesson to do with a group of kids.  In fact, when we were doing it, there were so many laughs and giggles, I would definitely do a repeat performance.

I had eight kids in the class for this lesson, in a local coop, so we started out by taking 16 heavy duty 9×12 watercolor papers and taping them together with masking tape on the back.   Then we numbered them with # 1 to 16.  After which the kids picked two papers and wrote their name on the back.  This way, when we flipped the paper over, they wouldn’t know exactly which two papers they are going to get at the end.  Ideally, I would have liked for them to pick non-adjacent papers, but it didn’t work out that way, and I think one or two got papers that were next to each other, which worked out just as well.

Here is what our paper looked like on the back (just fyi, the yellow stripes are supposed to be masking tape pieces). 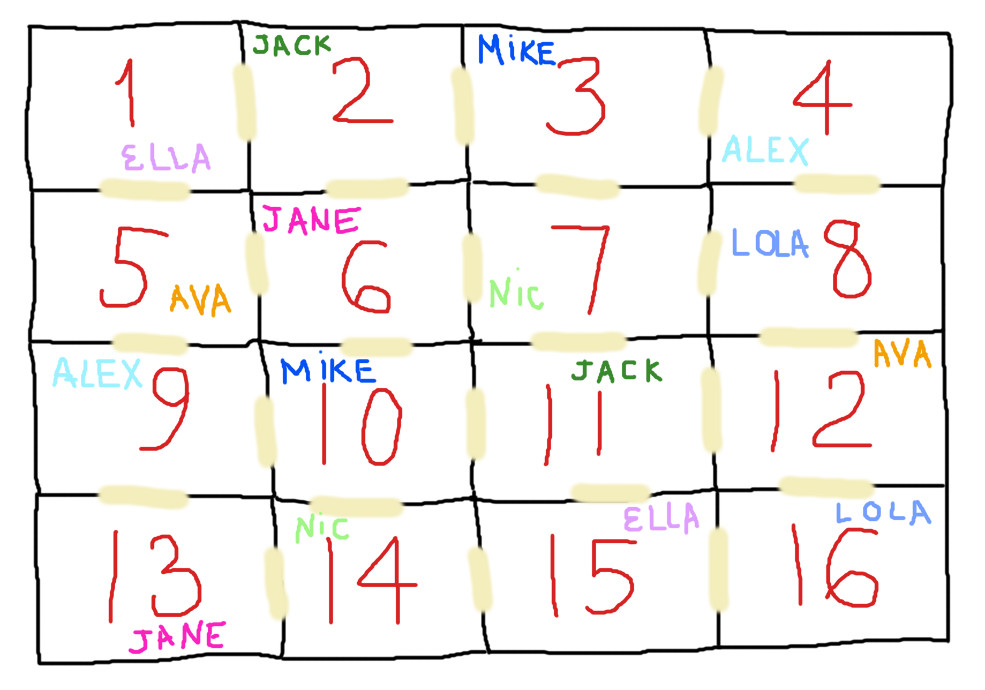 After we finished setting it up, we flipped the paper over.

Now, you do need a general theme. The possibilities are endless: you could do space, or jungle, or forest, garden, or anything that you are learning at the moment. For this time I picked an underwater scene. Imagine what you would see if you were in a submarine going underwater. I brought a few books with different sort of underwater creatures for the kids in case if they wanted to look through them, but most kids jumped right in.

Each kid got a fine tipped permanent marker to draw with. We all got comfortable on the floor, and started. The one request I had was for them to make sure to draw on the edges, putting their drawing from one paper to another. The reason for this was to make them comfortable with having their drawing come off the edge. Many young artists like to stick to the center, making sure their drawing fits into the paper, I wanted the kids to know that sometimes it is just as fun and beautiful if your subject comes off the edge.

They did great with drawing all the underwater creatures. In a few minutes you could see fish, jelly fish, sea urchins, octopi and so many others show up on the paper.

Once they were done, and satisfied with their drawing, we took the tape off, and each kid got their two papers.

Next, they had a few minutes to add anything else they wanted to their paper specifically with the marker. Then we got the watercolor pencils and watercolor paints. It was time to paint in their paper. This time they each worked on their own individual papers. It was a blast when they would only get a part of the creature, and they would try to figure out what creature it was and who had the other part(s), then sometimes they would coordinate with each other how to paint it in. It was a lot of fun.

When the kids were done, we put the papers back together using the numbers we wrote on them in the beginning. It was really cool to see all of their different styles on one big painting.

I like this lesson for several reasons. First, it was so much fun to watch the kids work together on a project. They were really enjoying it, and helping each other out as they went along. Second reason is the one I mentioned above with being comfortable drawing over the edge. In the future I would like to do a project where they absolutely have to have their drawing touch all four edges of the paper.

The one thing I have to note is make sure to test the markers and make sure they don’t get diluted with water. We used these:

Here is our beautiful result: 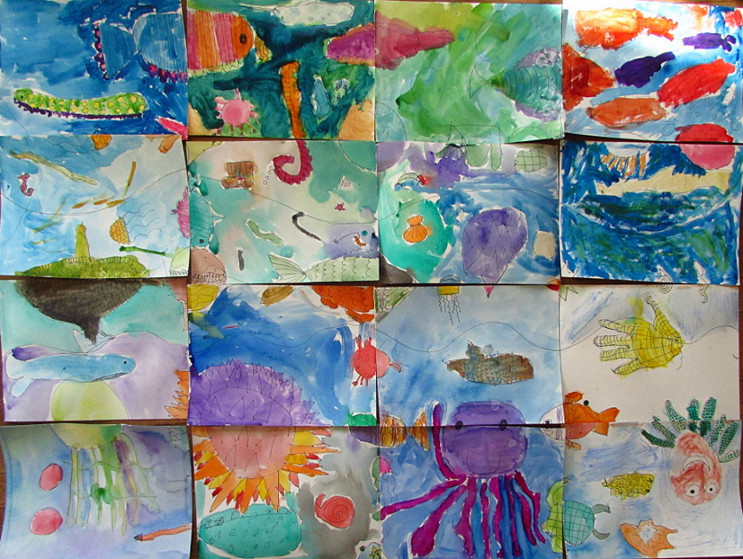