As I mentioned before, for me, colder weather brings on uncontrollable bouts of crafting.  I get the incessant need to hot glue things to each other, and it often involves sparkly things, sequins and the like.  I made this princess costume and almost immediately gave it away, because, well, I have boys.  For some reason I already had everything needed to make this at home: rolls and rolls of pink sparkly tulle, a jar of gems… I just had to make something with it!  I have been seeing these tutu skirts made all over Pinterest, and decided that I would like to try and make one for someone as well, and see just how easy it is.

This was easy enough to make, and unlike many crafts, the supplies were very inexpensive.  Here is how I made this easy princess costume that is almost completely without sewing.

It consists of three pieces: the tutu/skirt, the crown, and the necklace.

How To Make An Easy Princess Costume

Here are the rolls and rolls of pink, purple and sparkly tulle and organza that I just had laying there.  It was enough for the skirt/tutu, but I could have used even more. 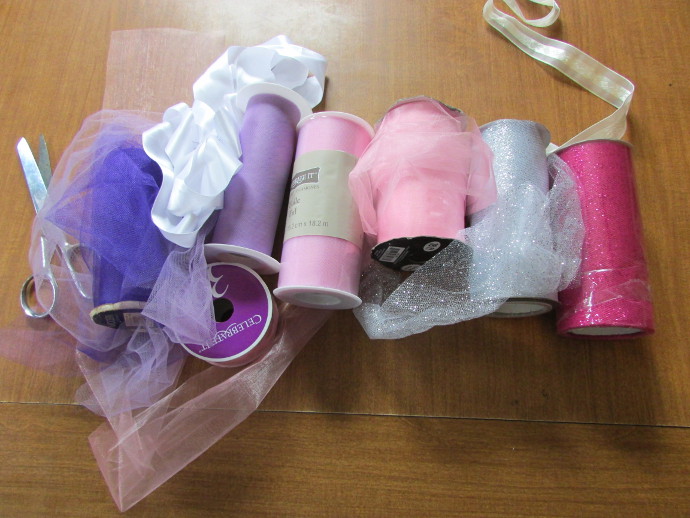 This is the only sewing I had to do: just make a loop with the elastic and sew it together.  Make sure the elastic measures comfortably around the waist of the person that will wear this.  I made it way to big, and halfway through, had to re-size. 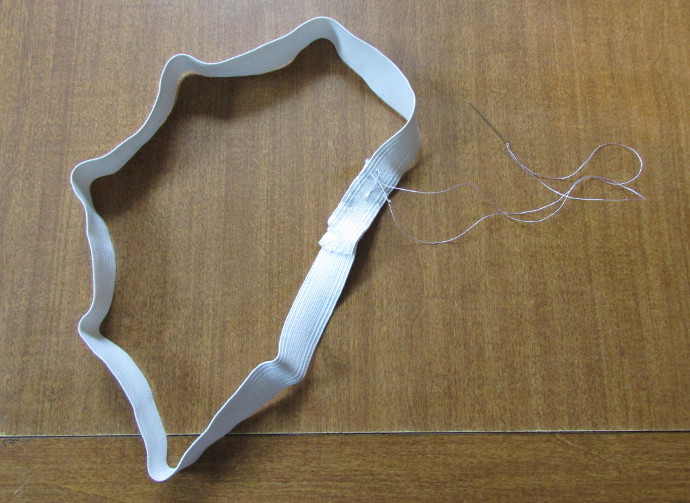 Next I cut all the tulle into 3-4 foot lengths, and folded them down the middle. 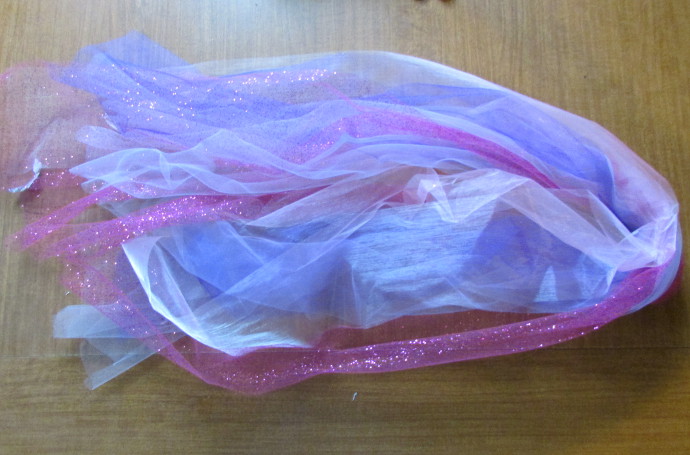 To attach the tulle to the elastic, first I would but the folded end over the elastic, like in the photo below. 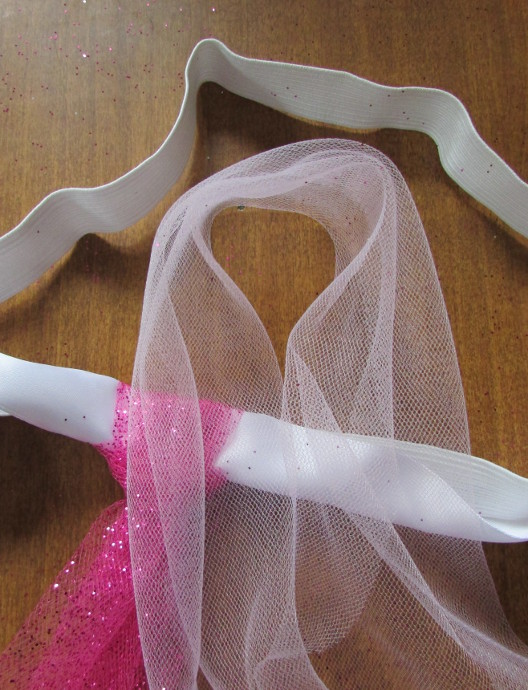 Then I would fold the folded end under the elastic, and put the two ends through the hoop that formed.  Please, ignore the ribbon, that was an idea that didn’t quite work as planned. 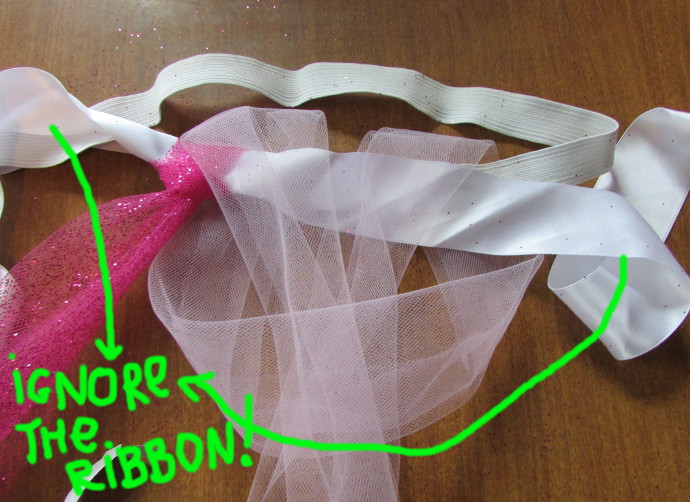 I kept working on it.  At first I put them all in a row, but later, I just started spreading them out and putting them where there was space.  I also pulled the ribbon out right after this. 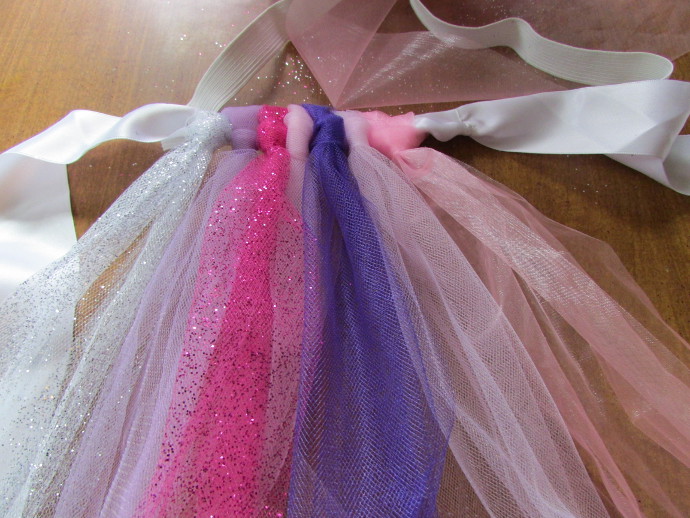 I also realized that my elastic was too big, so I cut a piece of it out, and re-sewed the ends together. 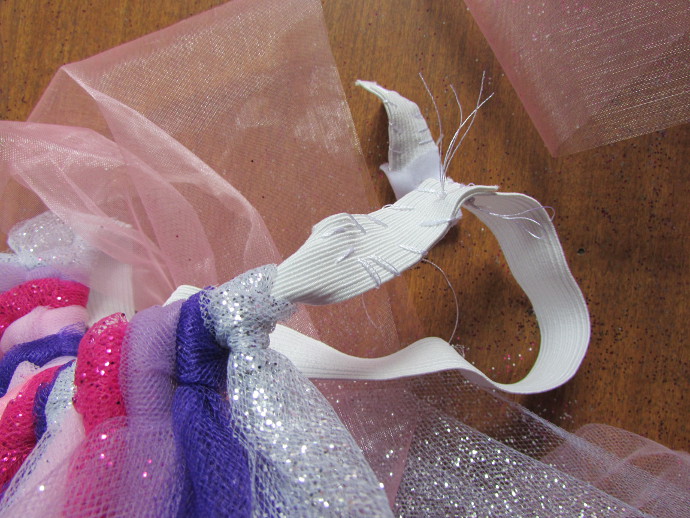 Taaa-daaa! All of the fabric is on. 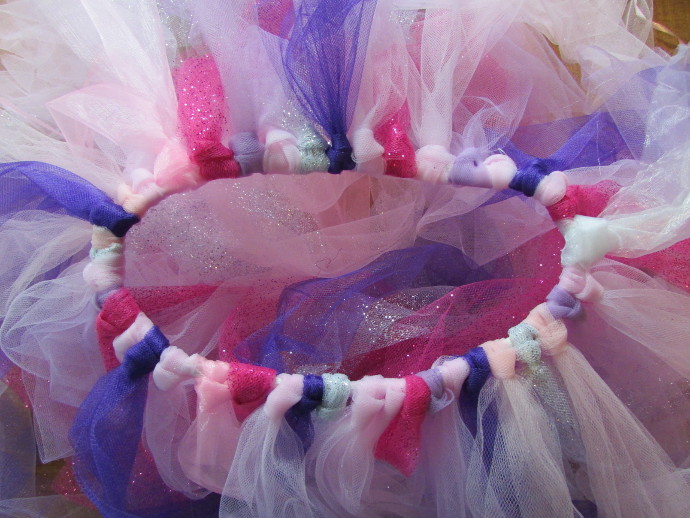 I hung it up on a hanger and trimmed the skirt to be all the same length. 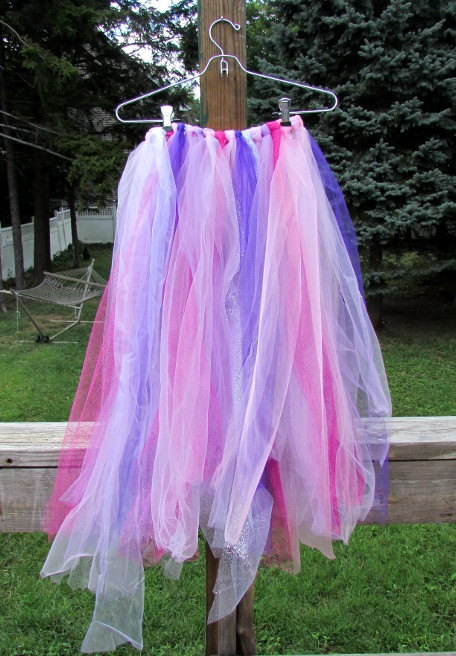 At this point, I have to confess, this wasn’t as easy as it seemed.  Tulle is a pain in the neck to work with, it tangles, and sticks.   It wasn’t difficult either, just not as easy as I anticipated. 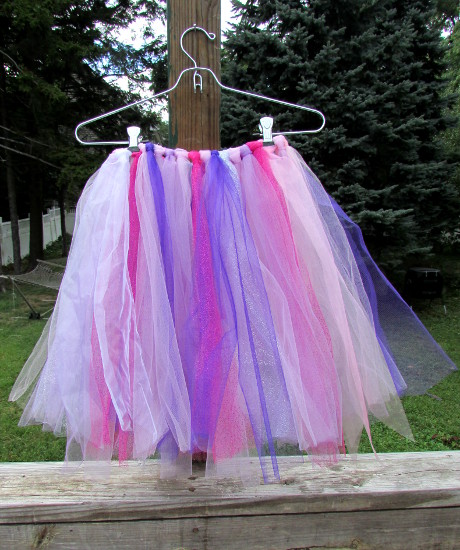 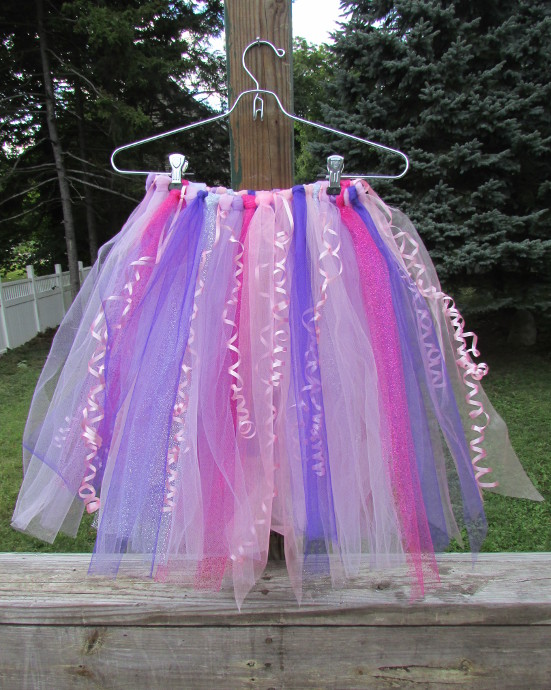 With the skirt all done, I moved on to a crown. It is made out of felt, sparkly gems, and ribbon. You will also need a simple hot glue gun to glue it together, or maybe just buy the felt with the sticky back, like THIS ONE. Though I have to be honest, I never used the felt with the sticky back, but it seems like a much easier way to go about doing this then using the hot glue gun. I highly recommend buying the felt, the tulle, the ribbon at your local craft store, chances are it will be less expensive there, and you will be able to feel exactly which fabric you are buying. 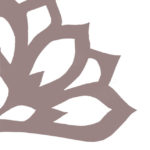 I used the following pattern.  Printed on a piece of 8 1/2 by 11 paper, folded in half, and cut the pattern out. 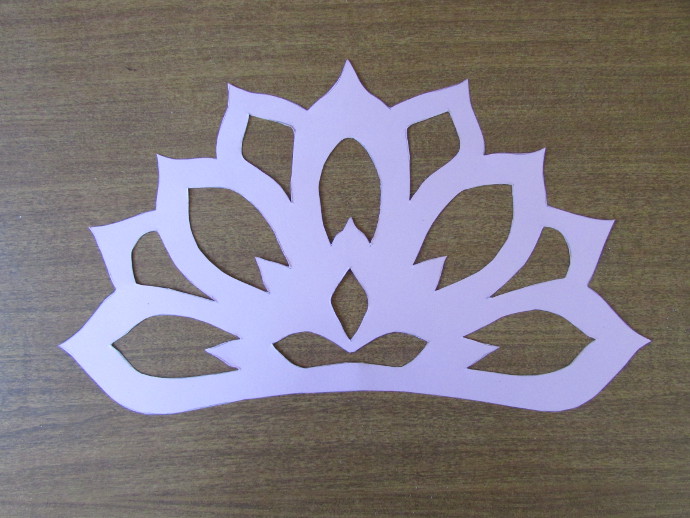 Then I traced it on the felt, cut it out.  Used the hot glue gun to glue the cut out felt crown to another piece of felt. 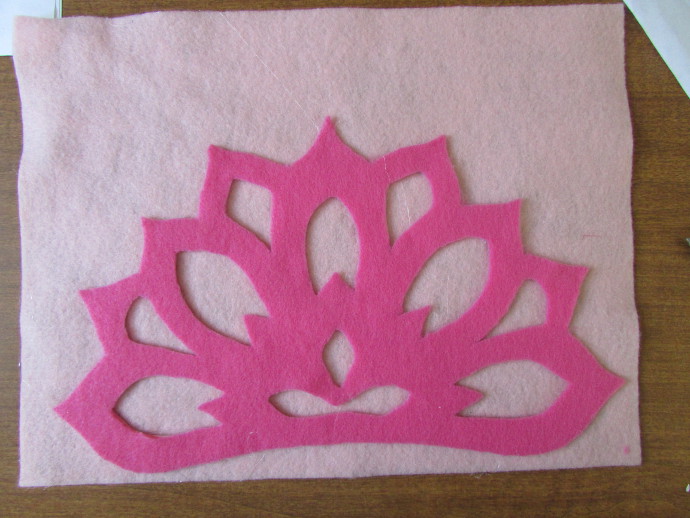 Then I used lovely small sharp scissors, just like THESE, to cut away the felt that I didn’t need to be there. 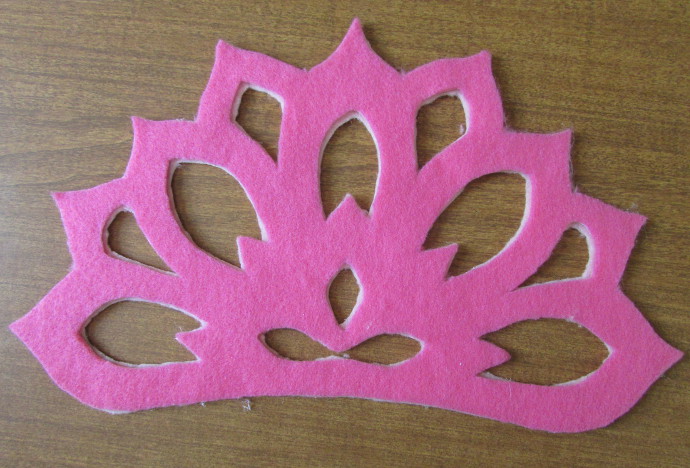 I used the hot glue gun to glue a whole bunch of gems (of course I already had a jar full of these laying around the house) on the crown. 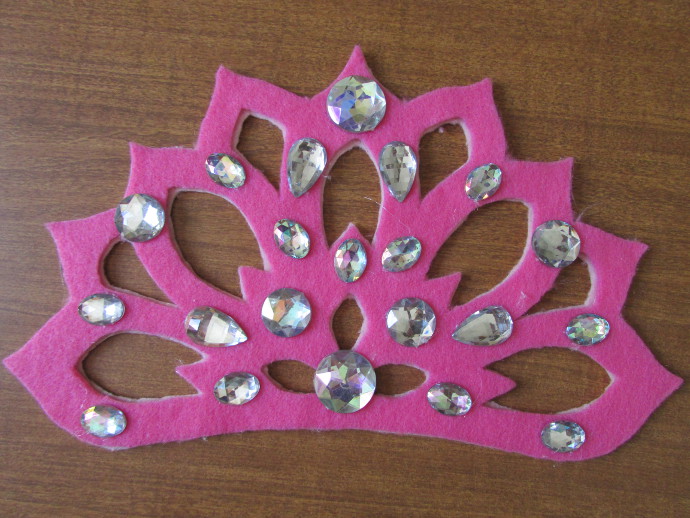 Then I put the ribbon through the holes in the center, and wrapped it around the end of the crown. 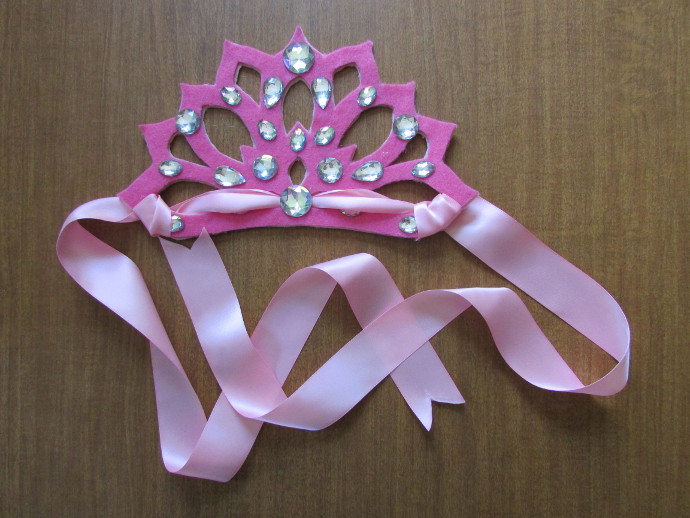 The last thing to go with this easy princess costume was a necklace made from a silk flower and beads. 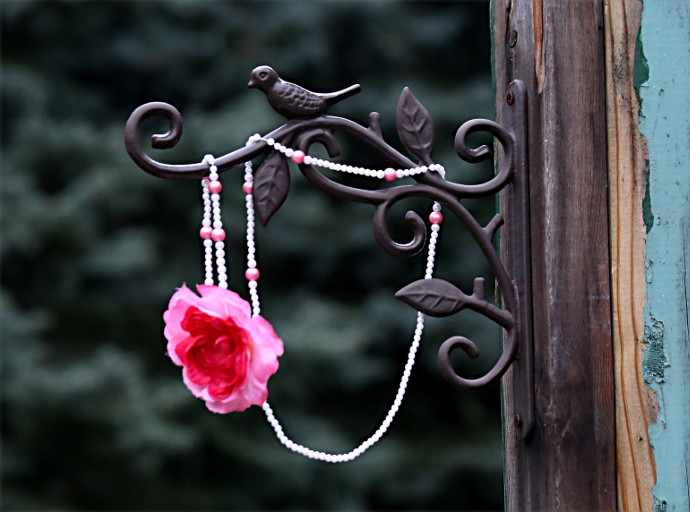 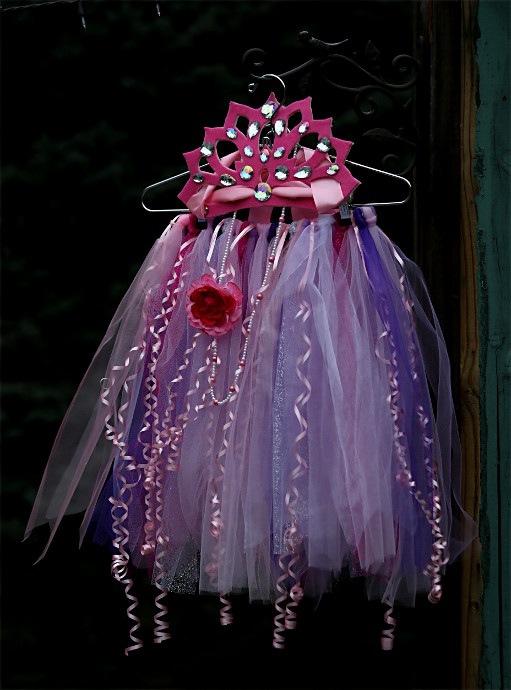