As the cold comes, I always tend to get my crafty hat on. I don’t know what it is, but I start knitting, beading, and just playing with scissors. I have been beading this past week, making necklaces and bracelets. 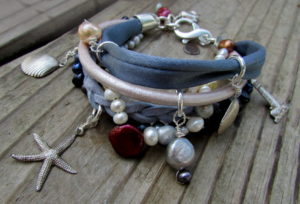 Perhaps because I have been missing the ocean, I made this ocean themed leather bracelet. Then I decided to make the leather and bead necklace, but so that it can convert to a wrap bracelet. This one had a ‘night sky’ theme to it, complete with a moon and stars.  I am rather happy with it: 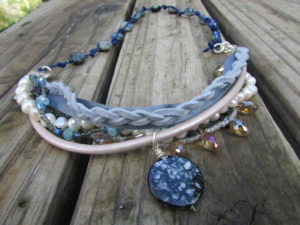 Full disclaimer: Folks at Endless Leather sent me some fantastic supplies to try out and to make jewelry with. They supplied me with the leather and the hardware for this project, and before I go on, I would like to note that everything that I got from them was excellent.

How to Make A Multi-Strand Leather Necklace and Bracelet: 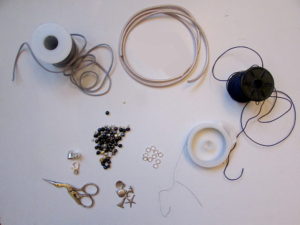 First lets talk about the supplies, from Endless Leather, I got a roll of super soft flat leather from their selection of leather laces, a roll of round leather cords, round stitched silk cord from their silk cords selection, and several pieces of hardware from their jewelry findings.

Other supplies that I used were my trusty pliers, pearl beads in various colors, Dandyline thread, collapsible eye needles, 28 gauge silver plated artistic wire and round flat stone beads that resembled a moon that I found in a clearance bin in Michael’s. They looked very similar to these, but in grey. I also had a variety of beads for the necklace: crystal teardrops, tiny stars, seed beads, etc.

A Bit About Glue:

For the glue, I used, Krazy Glue. I am sure that there has to be a better glue for this. I tried one I bought in AC Moore, but it didn’t work well for the leather, so I turned to Krazy Glue. FYI, I did indeed glue myself to the scissors at some point, and after a quick search online, I found out that you can remove this glue with nail polish remover. I had to soak my fingers and the scissors, until I could peel them away. Krazy Glue is strong, and if you value your skin, either use it with extreme caution or find a different glue to use.

To get started you have to measure everything! Measure around your arm, estimate the length of the hardware, cut leather, lace and thread accordingly!!! Super important. Make sure you string the beads to the right length as well.

This is the photo for the necklace center, with all the center pieces measured out: 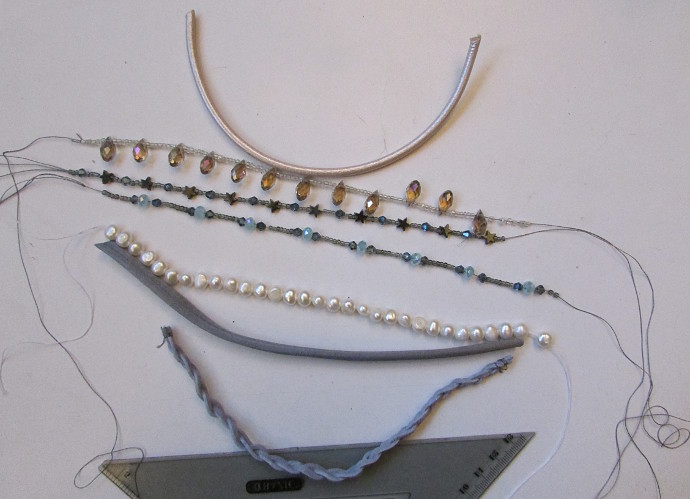 All of the ends had to be fitted into an 8 mm end cap, like the one in the photo below. 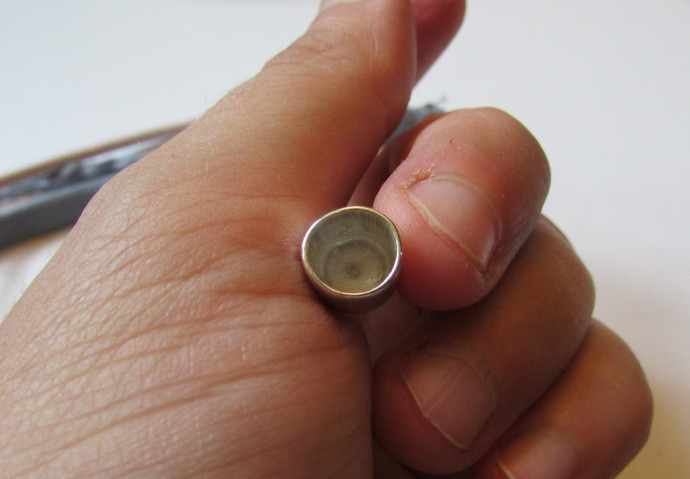 I put them together (the photo is the sea themed bracelet)… 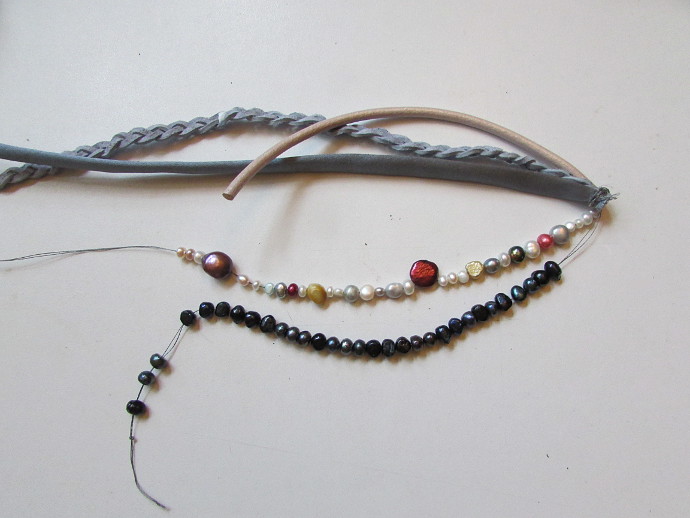 …and tied them with the left over string from the beads, then trimmed the extra edges off: 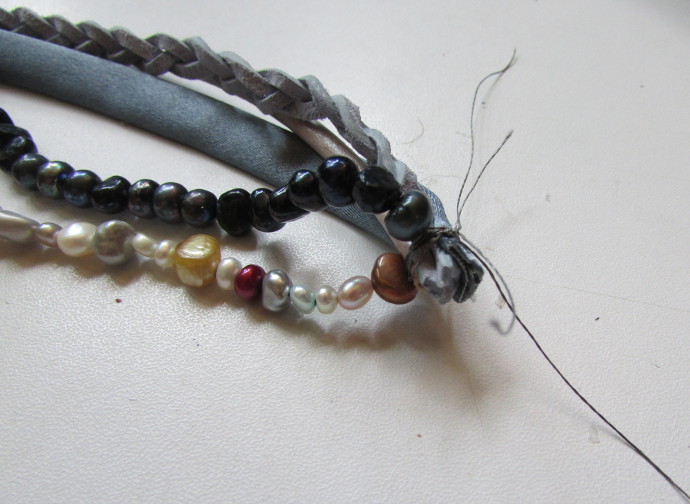 I fit one end into the end cap, and then repeated the process with the other end. 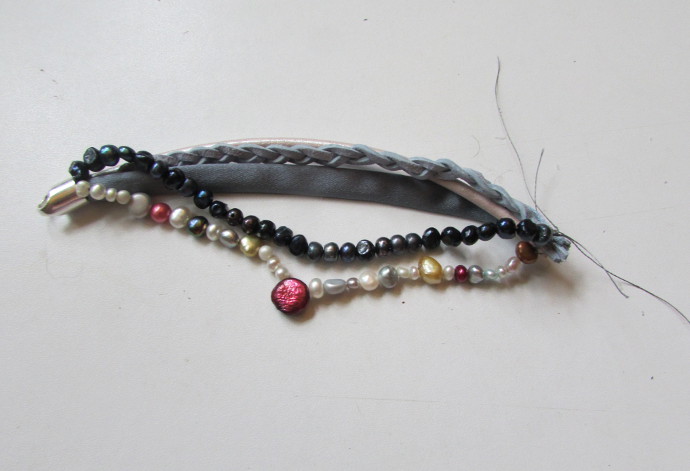 You have to be careful to put the components in the same order into both end caps. I made that mistake with the bracelet. It was a bit more twisty then I would have liked. 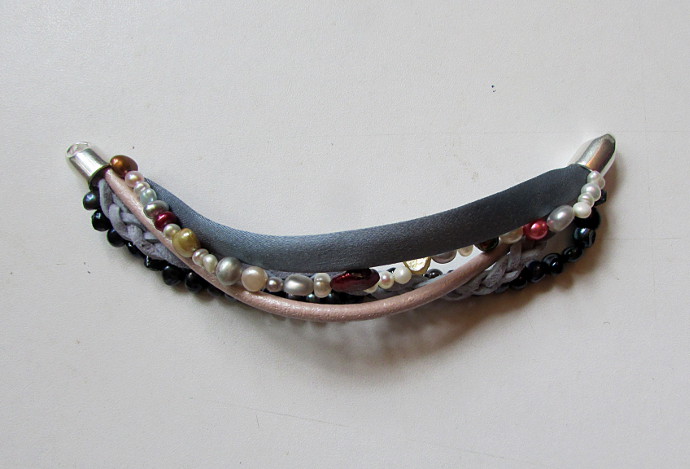 I was a lot more careful with the necklace, and I think it came out better. It took a bit of prodding and pushing the ends into the caps. I used a pointy thing, like a knitting needle or one end of my pliers to get it all in there. 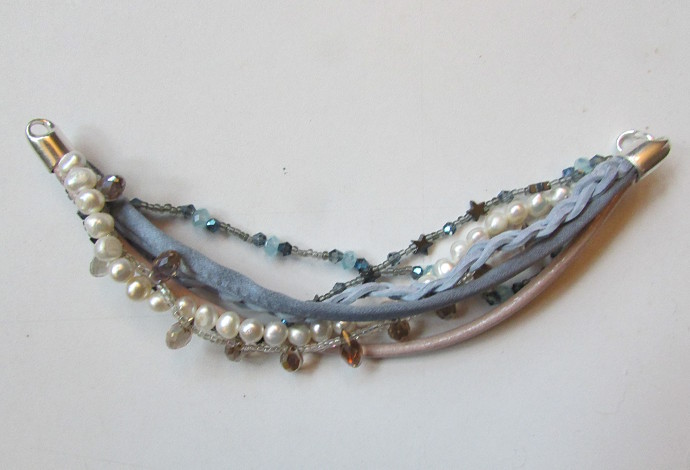 For the bracelet, all I had left to do is to add the clasp, and attach the seashell and lighthouse charms that I had. 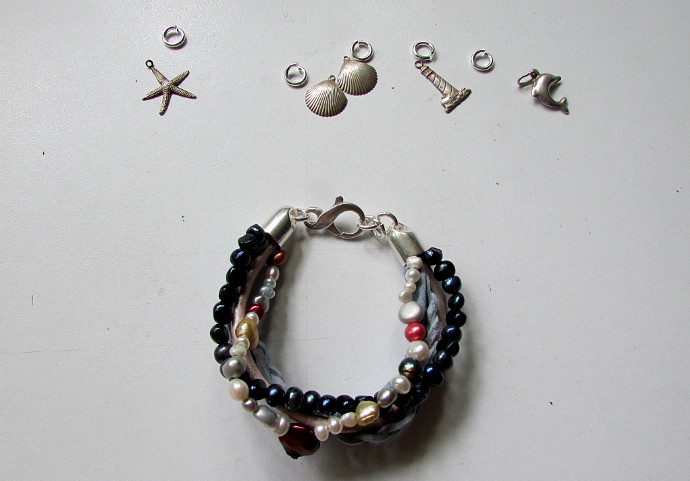 I don’t know if you can tell from the photo above, but the holes in the charms were way to tiny for the jump rings. Something that was fixed by using the wire. For each charm, I put a small piece of wire through and twisted it to the end. 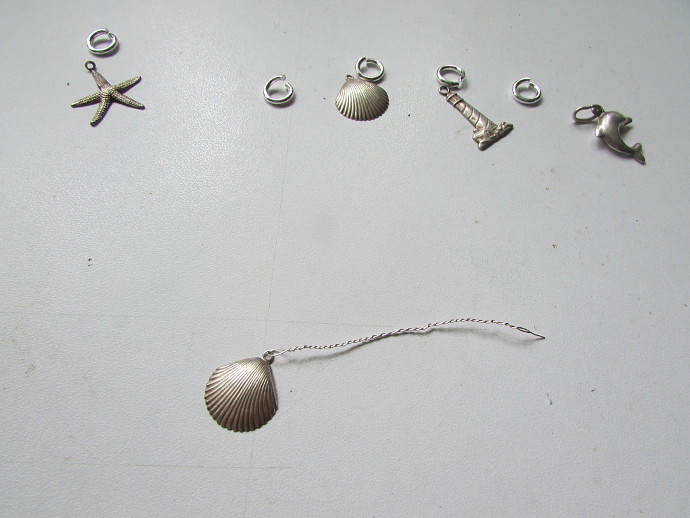 Then I made a little loop, and twisted it around itself. 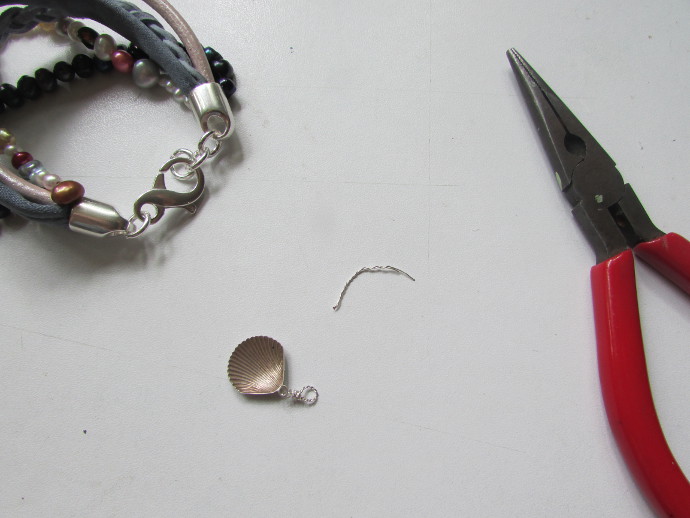 All done with the bracelet! 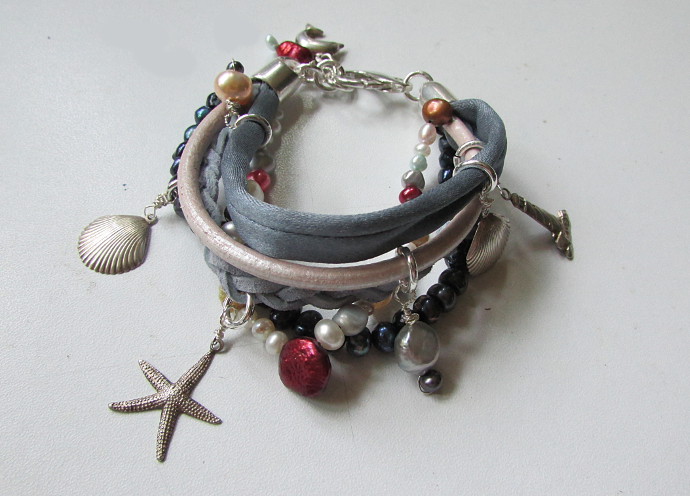 For the moon on the necklace, put a seed bead on the wire, bend it, and put the two ends of the wire through the moon bead. Then do the same thing as with the seashell. 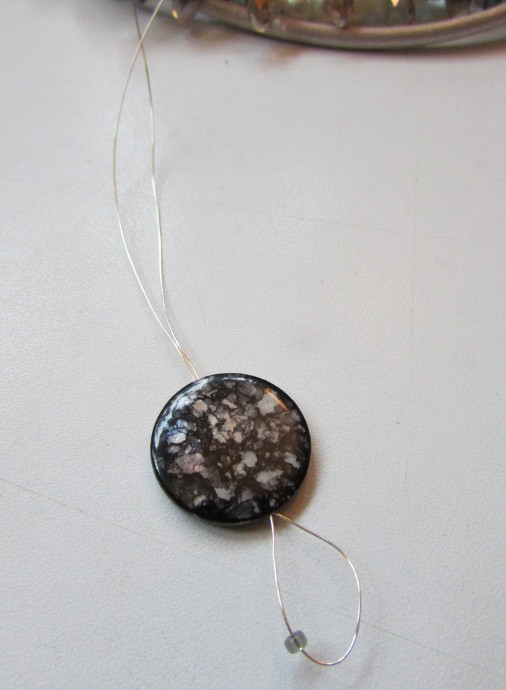 Make a loop, and twist the wire around itself. 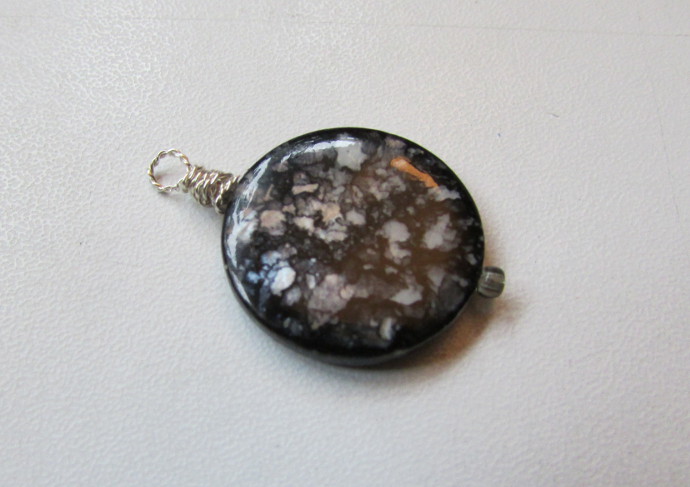 Use a jump ring to attach it to the leather. 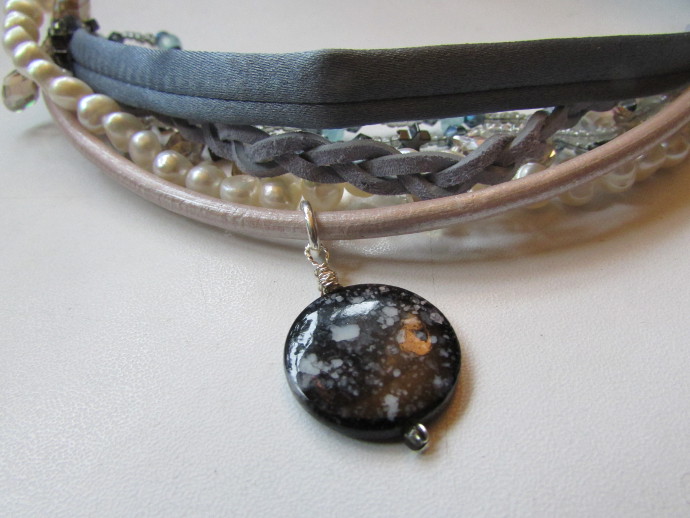 To make the second half of the necklace, I took a strand of the thin blue leather, and just looped it through the jump ring. Then I strung a large blue bead through on end, and tied the leather into a knot. Repeating it until I ran out of the blue beads. Then I added a few water drop beads to that as well. 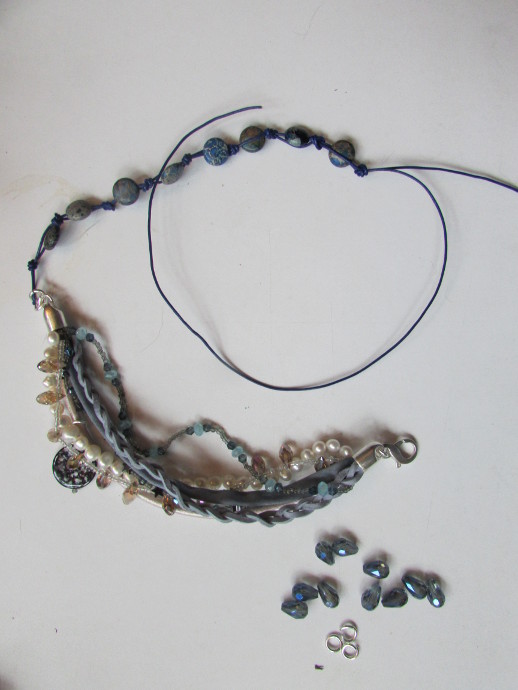 Once I was happy with how long the necklace would be, I stopped adding beads and just made an extra space with the leather. A loop. 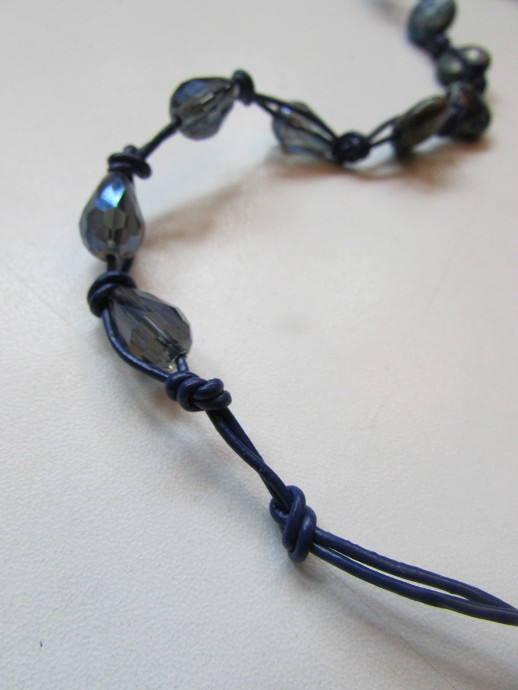 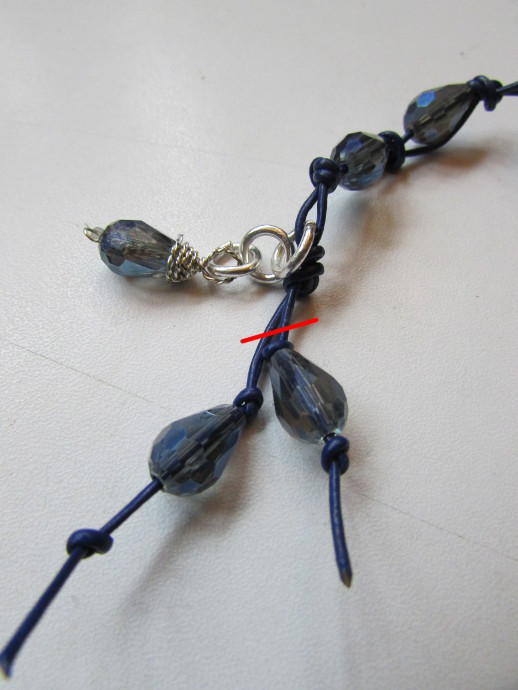 There is the necklace (before I cut the end beads off). 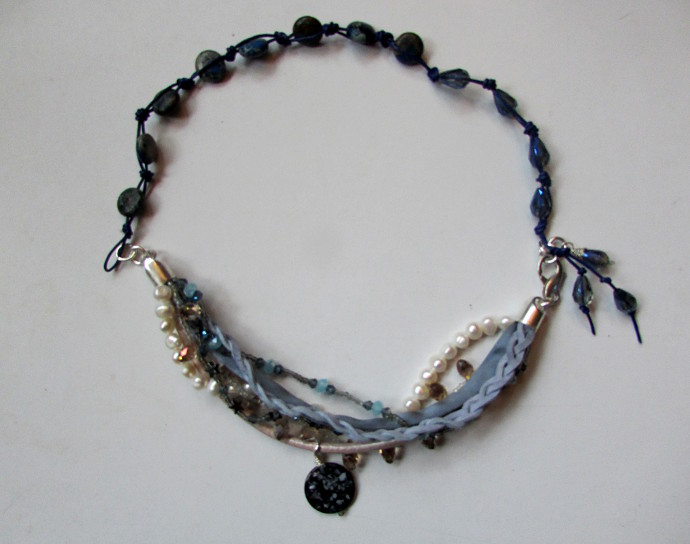 There it is all finished. 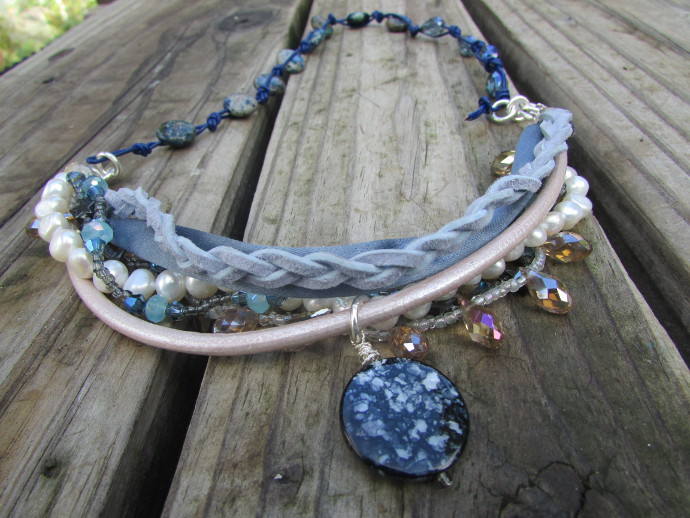 Or, you could wrap it around and use it as a bracelet: