Statue Of Liberty is going in both NJ trips and NY trips.  It’s a destinations for both.

This is our second trip to the Statue Of Liberty as a family. After being there once only a few years ago, I don’t know if we would have made this second trip so soon. However, this time my aunt was visiting from Odessa, Ukraine. We decided to go there and enjoy it together.

We went on a weekday in October, and were not disappointed. The weather was glorious, and since we took the ferry from the NJ side, it wasn’t crowded at all.

I think for this sort of daytrip, it’s not the destination, but the entire process of the trip itself.  We parked on the NJ side in Liberty Park.  The kids enjoyed running around, skipping on the old railroad tracks, and walking along the pier to the ferry.  The ferry ride was a lot of fun for them, both on the way there and back.  The walk on the island was enjoyable.  Even just sitting down for a bit of juice and chips outside was an experience.

The island hasn’t changed much, and neither has the statue. We took a nice leisurely walk around the island and shopped for some snacks and then souvenirs, and then caught the ferry back home. None of us felt like climbing even a few steps up, so we were happy with just the walk.  Unfortunately, the Ellis Island was closed due to the government shut down this October. We will just have to go and visit it next time.

The one thing that might seem silly to some, but important to me: the snack selection has improved since the last time we went there.  As someone that has to pack lunch everywhere we go, this is rather a big deal!

Of course the views of NYC can’t be beat from the ferry and from the island. I do think that the ferry ride was the most exciting thing that day for kids and adults alike. 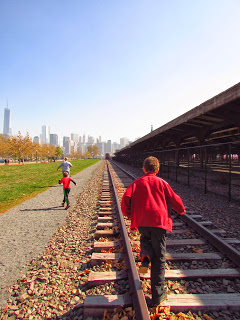 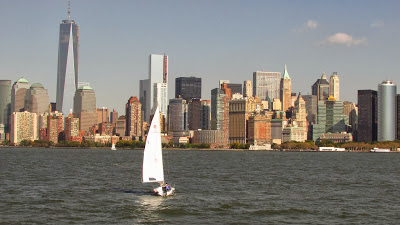