When my niece came over for a few weeks in the summer I figured that the perfect thing would be a visit to Build A Bear Workshop. Sounds like a great place to take a kid, right? That’s what I figured too, and it was. I went online, found a location next to us, even got a coupon in the mail for $10.00 off. Awesome! I was ready.

There are really two main things I would like to note about this place.  Number one is that even my two jaded boys had a great time with it. The girl was beside herself. This was her dream come true.  Thing two is that it is quite expensive! The $10.00 coupon didn’t even make a dent in it. Just stuffing your animals isn’t that much, but the clothing, shoes and accessories really kicked me in with three kids.

They boys were simple enough. They just got a dog and a bear, stuffed them, put glasses on them and that’s that. The girly girl wanted all the pretty dresses, that cost as much as my root canal. We wound up buying one, and then getting out my sewing machine and making a lot of bear dresses at home. It was fun, she learned something new, and her bear was the best dressed bear in the state.

Do I think it was worth it? If it were up to me I would get the stuffed animals in a store for a fraction of the cost.  HOWEVER, it has been a few years since our visit and my youngest boy still LOVES the dog he stuffed. He didn’t care for the clothing, but that is the only stuffed animal he sleeps with. Also, a year later, my niece still brings her bear and clothing with her where ever she goes.  My older one, I think was just too old for it at that point.

I also have to note that the girls that worked there that day were extremely nice and patient!

Here is the bear in a wedding dress outfit we made for it! 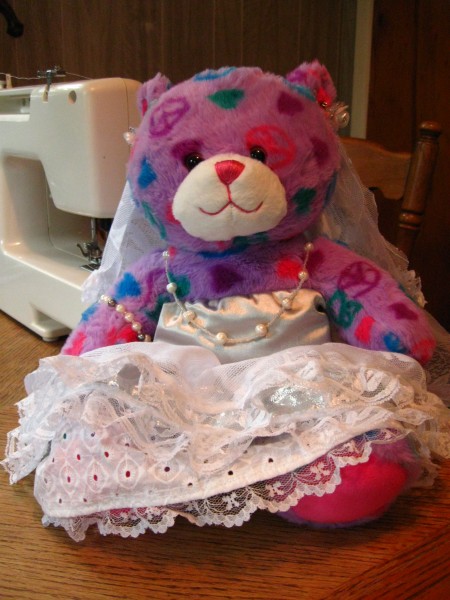